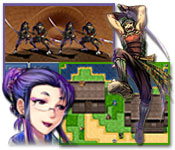 When an unknown enemy attacks, samurai Musashi Juniro is summoned to the last place in the world he wants to go, home. Forced to return to a place that has haunted him for years, Jun must face his demons if he is to be of any use to his master, Lady Akira. Even as new enemies appear, old truths are uncovered, and new threats exposed in this action packed Role Playing Game!