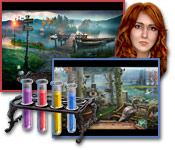 Congratulations, Professor Edwards! You've joined the faculty of the oldest and most-respected university in the world. You've barely been teaching for a semester when tragedy strikes during the fall break. Four of your students have gone missing while exploring the dangerous caverns under the campus! Is the legend about the Labyrinth under the campus actually true? What's causing the abnormal physics in the water down there? You don't have much time, because the rain keeps pouring down, flooding the caverns. Dig deep and keep your head above water in Sable Maze: Norwich Caves, an intriguing Hidden-Object Puzzle Adventure game. This is a special Collector's Edition release full of exclusive extras you wonâ€™t find in the standard version. As a bonus, Collector's Edition purchases count toward three stamps on your Monthly Game Club Punch Card! The Collectorâ€™s Edition includes: