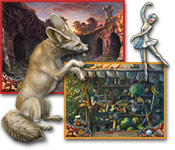 Grim Facade: The Cost of Jealousy

Unravel a puzzling whodunit in Grim Facade: The Cost of Jealousy! You have been called to Spain to investigate the murder of a grieving woman's husband. But what looks like a simple case soon becomes an elaborate mystery filled with twists and intrigue. You must use your skills to get a step ahead of the murderer before you become their next victim. But uncovering their identity won't be easy in this tale of deceit, betrayal, and disguise. Everyone is a suspect in this exciting Hidden Object thriller!

Get Full Version of Grim Facade: The Cost of Jealousy Game ($ 6.99 USD)