Northmark Hour Of The Wolf Game 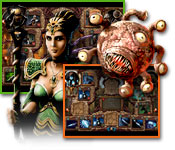 Northmark: Hour of the Wolf

Experience the thrills of adventure in Northmark: Hour of the Wolf, a card-based RPG. Choose to become a mighty warrior, cunning mage or powerful druid as you fight for glory and survival in arena combat. Explore every corner of the kingdom from fiery deserts to deep forests and cold mountain peaks and journey to the kingdoms of the elves and dwarves. Danger waits at every turn as you investigate the chilling mystery that threatens your homeland. Can you defeat assassins, thieves and hideous monsters?