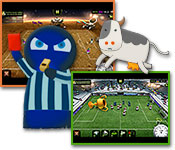 We all love soccer – but how badly do you want to win? FootLOL lets you use mines, shields, aliens, cows, guns and many more cheats to decimate the opposing team and protect your players. As a manager, you’ll take your team through a few training matches before being unleashed on new planets. As you go, you’ll unlock new gadgets, improve your players’ performance, and unlock new kits and hats for them to wear. Opponents often have the same tricks you do so it’s not as simple as knocking the ball in the back of the net!