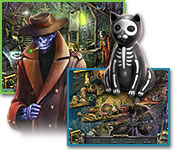 She said yes! Alan was finally going to marry his sweetheart, Catalina. She only had one small request before the wedding, to ask for her father’s blessing. The young couple travels to the small town in Mexico where her father is from, arriving just in time for the annual Day of the Dead celebration. But when he doesn’t meet them at the train station, that’s only the beginning of their problems. Is it just the heat, or did that book talk to you? And that guy is definitely wearing a skeleton mask, right? Cross the border between life and death in this festive Hidden Object Puzzle Adventure game. This is a special Collector's Edition release full of exclusive extras you won’t find in the standard version. As a bonus, Collector's Edition purchases count toward three stamps on your Monthly Game Club Punch Card! The Collector’s Edition includes:

Get Full Version of Calavera: Day of the Dead Collector's Edition Game ($ 13.99 USD)