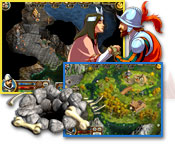 The story of Adelantado continues in Book Two – get ready for new adventures and unexpected twists! The sequel starts where the previous part left off. Don Diego has found a new path and now he continues his mission. There are still survivors from the previous expedition to save, glory to achieve and gold for the Spanish Crown to find. His crew, however, is tired. While some people start to rebel and abandon Don Diego, some stay loyal, and together they advance through wild jungles and endless swamps. The atmosphere is moody and grim but Don Diego tries to keep everybody cheerful, though an ever-present rival, Commander Rodriguez, is more evil than ever!